Behind the scenes of Lycksele Zoo

Thea Holmqvist
Thea Holmqvist
Lycksele Zoo is Swedens northernmost Zoo and houses some of the best parts of the nordic fauna and animal life. But how is the life as a zookeper at Lycksele Zoo?

It's thursday. Almost weekend for most people, but in the middle of the week for the zookeepers that treat every day as a potential workday. The storm Ylva has swept through the two northernmost countys. In Lycksele the brutal snowfall is accompanied by strong winds, but it doesnt matter. The animals in Swedens northernmost zoo needs to be tend to, be counted and fed.

The schedule has placed Maj-Britt to work in the storm. It is she, that has decades of experience that drives the car up the slippery, snow covered slopes. The windshield wipers work in superspeed to make it possible to see anything. To get the food out; hay, water and buckets with pellets and ground meat, will become an unusually difficult task.

The number of hours in a snowstorm is fortunately not that many during a year. Not that it really matter; for the zookeeper from the coast of Västerbotten the childhood dream came true. Since the beginning of the 80's, she has the "best job in the world".

- Even though we have a lot of routines, the job never gets boring. We have a lot of variation in what we do, everything from training the seals to going out into the woods to get twigs and shrubs for the animals, Maj-Britt tell us.

- The seasons also adds to the variation. In the spring most of the animals give birth. In the summer there is a lot of guests, guided feeding of the animals and visits in the childrens zoo. In the winter the landscape is magical, and the year ends with the Christmas zoo during december, Maj-Britt continues.

During her roughly 30 years at Lycksele Zoo she has built close relationships to all animals in the park. One of them is Totta, the 22 years old grey seal, and another is the newcomer Miessi, the reindeer calf that lost its mother and found a new one in Maj-Britt.

- Yes, this is my lille baby, says Maj-Britt when she, after heating the frozen lock with a gas-torch, at last get into the reindeer pasture. Nothing is done the easy way this day. For Chris Cockerill, the intern that normally experience much calmer workdays at the university in Manchester, where he study biology, the snowfall is close to a supernatural experience

- We have a lot of strong winds at the coast, and the winters are quite cold, but i have never before experienced this much snow, he says and smile.

-My classmates will be jealous, he continues and pick up his phone to capture the moment right next to the musk oxen. 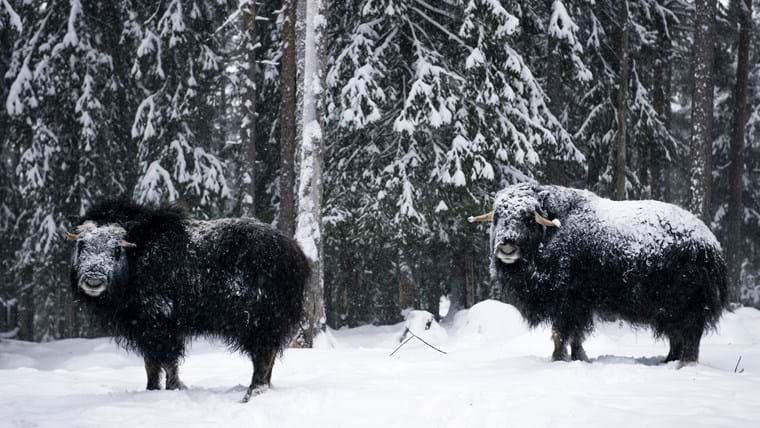 One third of his internship has passed since the arrival in september and the lessons learned are many. At least that "wolverine" not only is a character in the x-men movies, but also one of the 5 big predators in Scandinavia. There is also a lot to experience outside the zoo. This summer he is looking forward to the bright nights he has heard of, but right now big parts of his spare time is dedicated to take photos of the northern lights that he describes as "unique".

It's not as unique for Ida Lund, the intern from the agricultural college in Öjebyn outside of Piteå. During her youth in Älvsbyn the northern lights has danced before her many times, but just because it's not as unique doesn't make it less beautiful. The passinate discussions about the phenomenon in the sky is paused every time they arrive to a new pasture and is resumed as soon as the buckets of food and hay is emptied and they are back in the warm vehicle. When the cloven-hoofed animals are all fed, one hour of lunch is waiting. After that it is time for the predators; wolverine, arctic fox, fox and wolf that is waiting eagerly for their food. Even the shy lynx is seen between the snowflakes for a couple of seconds. At the top of the hill the snow lies untouched; the bears have since a couple of weeks back been sleeping in their den.

Before they take a short warming coffee break they also feed the gute sheep. It is one of the zoos many domestic animals, where many, like the mountain goat and the jämt goat, is part of a preservation project Lycksele zoo is a part of.

- It is a collarboration with some other zoos. Here in Lycksele it includes several threatened nordic species, like the european bison, musk ox and the arctic fox. Also we have a few west bothnian bjurholm hen, Maj-Britt tell us.

When all the cups are emptied and all fingers regained their color dusk arrived. The time is 2pm and it is time for the seals to get their second meal of the day. The snowstorm has calmed down and you can hear conversations over the sound of clapping paws with the translation "MORE!". The three zookeepers do as they want until the buckets are empty.

The rest of the day is spent without contact with the animals, but regardless the weather och day on the calendar they meet again the next day.