The oldest culture in Sweden

The sami is one of the indigenous people of Scandinavia and is believed to have settled on in these lands around year 7800 BC based on a settlement found by a lake in Arjeplog. The sami people has their own language, their own traditions and their own religion. But it has not been easy to keep this, and to this day they are facing difficulties. It is said the farmer Ottar told the english king around year 890 BC that he owned more than 600 reindeer that was being taken care of by sami people, but it is likely that the sami people has been doing reindeer husbandry for longer than that.

The sami often lived as nomads, they followed the movement of the reindeer och settled where the renindeer could find food for the season. This way of living started to be threatened around year 1300 when the king of Sweden encouraged the swedish people to "regain their land" and colonise the land of swedish lapland, where a majority were living. Half a century later, church villages were being built in swedish lapland to spread christianity to this, at that time seen, primitive people.

The church village of Luleå was founded around year 1500 and is still standing, the same applies to "Gammplatsen", in lycksele. Year 1607 the first church were built at "Gammplatsen", called "Öhn" and 1632 a school for "lap boys" was founded. Öhn that was used as a gathering place and a market place was abandoned in the end of the 18th century.

Today "Gammplatsen" is again an important gathering place for the local community and is attracting visitors year round, a lot thanks to the forest museum and Lycksele local history society.

Conflicts about hunting grounds and fishing waters got more common and gave consequenses for the sami that needed the the nature for their livelihood.

Northern Sweden got more and more exploited by settlers from the south that brought christianity and their own traditions. 1685 king Karl XI announced that the sami religion to be crushed. The sami shaman drums were to be burned and the holy sites to be destroyed. To practice sami relogion was no longer allowed and transgressions were punished. Lars Nilsson that tried to save his drowning son with a drum, was burned alive for his actions.

The swedes considered themselves to have a right to the lands and sami that was ouside of lapland was immediately sent back. It was 1749 that the sami got the same rights as swedes to build new settlements, but they had far from the same rights in other areas.

Year 1868 the sami was an object for research. They were photographed and got their skulls measured in purpose of defining their race, this continued on behalf of the state institute of racial biology in Uppsala up until the middle of the 20th century. The sami language, traditions and religion slowly faded away as they were more and more influenced by the swedish culture and traditions, and the sami dialects are as of this day classed as threatened. Investments has been made to save the language and the culture, partly through education but also in different cultural forms. When staying here in northern Sweden you will probably discover that a lot of places has 2 signs telling you where you are, one is the swedish name of the place and the other is the sami name of the place.

To this day it is only  sami that can own reindeer and many still have reindeer husbandry as their primary occupation. But it is not easy, other interests are in conflict with the raindeer industry. Rivers are expanded, new railways are being constructed, wind turbines are being built and mines are being expanded. All these affect how reindeer and move and find food.

Other factors can affect the sami and the reindeer as well, more and more people want to be out and about in nature which means that reindeer has a bigger risk of being disturbed during the calfing and their movement. Hence it is important that we, that love being out in nature, show respect.

A couple of tips:

- Reindeer counts as domesticated, but move around freely in nature. If encountering a wild reindeer, keep your distance and try not to disturb.

- Reindeer like the road salt that is spread on the roads during winter and it is not uncommon to se them along the northern roads. Drive slowly and let the reindeer move calmly and safely.

- The reindeer are calfing in the spring, at that time of year they need even more peace and quiet. Keep you dog on a leash when walking in the forest and walk around if you encounter them.

- The reindeer are moved to new pastures a couple of times a year. They usually use the same routes every year. Stay away, if the herd is being separated it might create several days f extra work for the sami that need to gather the herd again.

If you want to meet rendeer, and we believe you want to, there is places where you can do that in controlled forms. At Jon-Krista Jonsson in Rusksele and at Börje Stenlund and Vildmarkscampen in Malå there is opportunity to get really close to these fantastic animals.

JK Event
Vildmarkscamp in Malå
All information is found here! 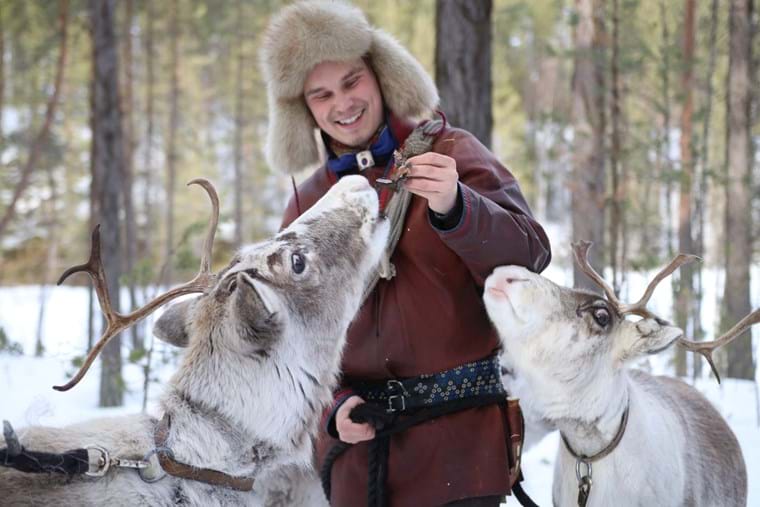